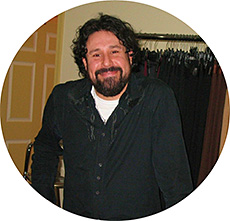 The Manuel”Manny” Cuevas family heritage in the fashion industry stems from the creation of handmade iconic looks since the 1950’s for artists and entertainers like The Rat Pack Elite, Elvis Presley, The Beatles, Salvadore Dali, The Lone Ranger, Johnny Cash and countless more. These handmade creations have been proven to stand the test of time and are some of the most recognizable iconic imagery from pop culture’s history.

Learning to sew by the age of 6, rhinestoning suits, hand lacing dresses, and tooling leather by the age of 7, Manuel A. Cuevas better known as “Manny” has always been watching his artisan father and learning. Manny learned about tailoring and fashion design from the methods taught to him by his father Manuel and from the artisan co-workers at the shop in Hollywood during the 1970’s and 1980’s. These early childhood experiences created a unique perspective into the world of fine craftsmanship and became the fundamental base for his keen eye for detail and the dedicated work ethic he executes today.

After helping relocate his father’s shop to Nashville in 1991, Manny was inspired by the success of the family business and renewed brand recognition gained from the move.  He became more involved with the shops client relationships and started to design and create more individual garments for those celebrity clientele. Manny worked with many of his fathers clientele making individual pieces for Johnny Cash, Hank Williams Jr., and Dwight Yoakam to name a few. In 1993 Manuel Sr. took Manny to his first trade show at Denver’s Western English Sales Association, the premier trade show for Western art and design. Seeing all of the other fashion brands at this trade show and also seeing several pieces that were obviously inspired by the designs from the Manuel shop, Manny realized the full potential for the Manuel brand and was ready to create a collection and expand the family brand. Manny worked with a manufacture to create the first large production of designs from the Manuel Shop.  “The Manuel Collection” represented a unity and togetherness between both father and son and was the first time Manny began to learn about large manufactured production runs.

Further collaboration by father & son was also celebrated with the ”Star Spangled Couture” collection. This extraordinary work of art comprised individual handmade jackets created for each of the 50 states as a tribute and thank you to America. This collection was exhibited at the prestigious “Frist Museum” in Nashville and the “Cowgirl Hall of Fame” in Fort Worth. These jackets were on the runway at Manny’s first showing of  his “Ready to Wear” collection in 2006 at New York’s Fashion Week in Bryant Park.

The launch of the Manuel Exclusive collection started the family’s Manuel brand PR buzz with articles written in “The New York Post”, “Flaunt Magazine”, “GQ”, “Vouge” & “Vanity Fair”. The following week a major marketing push occurred during Oscar Week in Los Angeles at a press and celebrity attended week long showing of the collection. The collection sold at many prominent boutiques across the country as well as Neiman Marcus and Bloomingdales. This experience exposed Manny to the full cycle of a large scale production of a fashion line. From the beginning concept drawings, CAD design, traveling the world sourcing material, working with the factories in Italy, on fabrication creating and managing budgets, producing a fashion show as well as other efforts for promoting and selling the collection, this experience gave Manny a unique insight to all phases of producing and running a fashion line.

In 2009 Manny began an endeavor to create a brand of his own, by continuing The living legacy as Owner and Designer of Wear It Out by Manny designing for such artists as; The Band Perry, Ronnie Dunn, Daniel Peck, Bridget Tatum, Kieth Gattis and Paul McDonald of American Idol. Manny is focus on creating new designs, hand made garments, producing limited run collections, as well as consulting for other fashion brands.

“To say this is an exciting time in my life would be an understatement, seeing the indelible stamp my father has built in the industry of couture and carrying it into the future to grow in such meaningful ways is really wonderful. Being able to bring what I do to a larger and more varied clientele is really an honor.”
Manny is inspired by his all Mexican & American rich family heritage, the fashion history of the Americas, and the never ending recycling of pop culture. He is infusing new energy into traditional patterns, such embellishments, contrast stitching, vivid embroideries and a keen use of rhinestones and palettes combined with exotic skins all bear Manny’s sartorial signature. He has proven that his craftsmanship is a product that is sincere, with pure quality and opulence.